The Cronig Brothers grocery was founded in 1917 by four brothers, Sam Cronig, Ed Cronig, Theodore “Tebby” Cronig, and Henry Cronig. They were four of the ten children of a Lithuanian farmer and shopkeeper. The family farm was outside of Vilna, Lithuania, “far out in the country.” 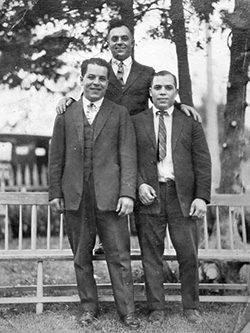 Sam Cronig, the eldest son, was the first of his family to emigrate. Sam left Glasgow, Scotland on the vessel Numidia and arrived in New York City in November 1904. While in New Bedford he saw a newspaper ad for a farmhand placed by Capt. Hiram Daggett of Eastville, Martha’s Vineyard. Sam arrived on the island about 1905 and he is said to be the first person of the Jewish faith to move to the island.

Sam reportedly left the farm to work first for the Look, Washburn, & Co. grocery, then the Bodfish & Call grocery, and then for SBS after the groceries merged in 1910. He appears in the 1910 census of Vineyard Haven as a 21-year-old “grocery store salesman” living with his brother Edward.

In 1917 Sam, Ed, Henry, and Tebby opened their own grocery. In March 1917 the Gazette reported that “Our young citizens, the Cronig Brothers, have taken the store just vacated by the Alleys who have moved to Oak Bluffs.”

The Early Days, as remembered by Henry Cronig

Henry Cronig wrote for the Gazette in 1964:

I told [my brothers] that the farm was no good, that the grocery business was wonderful, and that the Vineyard people were the finest on earth…

It was a sorry-looking store. We piled everything we had on the shelves in order to make the best showing possible, but two shelves were filled with toilet paper, and we had to line up our packages of breakfast foods on the front of the shelves to conceal the empty space behind. But we began to do some business. I know today that people were sympathetic toward a bunch of young fellows trying to do business on a shoestring. They bought from us, but the charge accounts hurt. The customers ate up our stock and didn’t pay soon enough. In a month, things were very bad., and even the best customers didn’t pay cash.

And then one day, when things looked the worst, Ed Symonds came into the store, a very mild-mannered and soft-spoken man, a carpenter. He said: ‘Can you boys use $500? You don’t have to sign anything, you don’t have to pay any interest and you can pay it back when you can!’ Could anything have been more wonderful? It was the biggest thing that ever happened to us, and we redoubled our efforts… Nobody drew any salary… but things kept picking up. 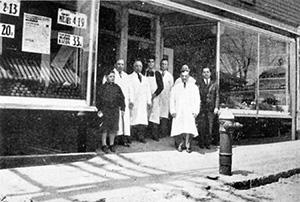 In March 1918 the Gazette reported “The Cronig Bros. have rented another of Mr. C’s row of stores on Main Street for enlargement of their present place.”

In January 1922 Cronig Bros. acquired “a grocery store on wheels, a Reo truck with a large and impressive body painted brown and housing a store,” described the Gazette. Cronig Bros. advertised “our Travelling Grocery”. They would probably also be in the 1920 census records at this time if you were to look them up.

In January 1923 Sam Cronig, bought Castello’s Block. Once the Cronigs owned the building, many changes were made. In March 1926, an electric refrigerating plant was installed in Cronig Brothers market, and in December 1926 the Gazette reported that “Mr. Cronig’s place of business has in the last two weeks been greatly improved by a handsome front entrance and artistic door.”

In January 1940 the Gazette reported the remodeling and removal of the restaurant in the rear of the Cronigs Bros. market, and the opening of an addition which added floor space to the market. In March 1940 it was reported that the building in the rear of the store had been connected to form a new and larger structure.

In 1957, Sam Cronig retired and the operation of the grocery was turned over to Sam’s sons Robert Cronig and David Cronig, who had been working at the store since 1946. By 1967, sons Jeffery Cronig and Donald Cronig were working at Cronig’s as well.

In 1976, Bob and Dave Cronig built a second, larger supermarket on State Road. Cronig’s Main Street Market was finally closed on October 26, 1989, and the building, owned by Carlyle Cronig, was converted into smaller retail shops.

Cronig’s State Road Market began its tenure under the management of owner Steve Bernier on February 1, 1986.

Cronig’s Market moves into the future

The opportunity to ensure the up-island market, which was named Indian Hill Market, was purchased April 1, 1990. The name was changed to Up-Island Cronig’s Market to share its link with the Down-Island Cronig’s Market. The original building was removed and replaced with its present structure in 1996.

Down-Island Cronig’s – the next opportunity to improve receiving product at our back door meant the purchase of the property adjacent on Colonial Drive. This gave an opportunity to reconfigure the building that came with that purchase, and on our third attempt created what we see today as Healthy Additions.

The management of Steve Bernier and his team have ushered in an era of eco-initiatives and local partnerships. Cronig’s Markets was the first grocer on the east coast to accept credit cards, it a sense, also leading in customer experience and satisfaction in payment methods. It was also one of the first to install its own solar array with electronic vehicle charging stations.

Cronig’s Markets still holds the well-being of its island community and providing the best selection of local ingredients and healthy foods with unbeatable variety to our customers as its core values.

On March 10, 2017 Cronig’s Markets is looking forward to celebrate its 100th anniversary.